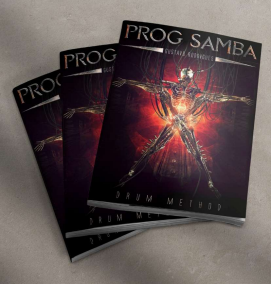 Renowned Brazilian-Australian drummer, Gustavo Rodrigues will  be releasing his new book in December of this year, titled “Prog Samba”.

“Prog Samba” will detail his brand-new music style he has been working on. Rodrigues said,  “I am very excited to be bringing something fresh and exciting to the music industry that I  believe a lot of people will really enjoy. I wanted to document my journey so that people could  understand exactly why I am so passionate about this new drumming method. I want to  inspire the next generation of drummers to keep pushing boundaries and reaching new  heights in this field.”

Rodrigues has gained a lot of popularity in the music industry over the past several years. His  work is known widely as he has been in several bands of heavy metal, pop, rock and alternative  music styles. Part of his career, Rodrigues was preforming in Brazil. He has performed in a few  of the biggest events in the drumming space such as the Modern Drummer Festival, in 2002 ,  Bateria 9 Voltz, and many others .

In 2009, Rodrigues relocated to Australia and has since been working in the Australian music  industry as a member of the award-winning band, Seven Sermons. Rodrigues continues to  work with the band, performing shows.

Most recently, Gustavo has been working on his drumming method which mixes progressive  rock with classic Brazilian music styles. This brand-new music style is what inspired Gustavo  to release his new book.

Spotlight is now on a newborn platform Jakaverse

DeFi Yield Protocol Tools Are Coming Soon To The Community